As so many other people, the students and staff at Beyond Relief trade school had hopes that 2020 was going to be a better year than 2019.  In Haiti, 2019 brought high inflation, shortage of gasoline and an extreme shortage of food.  Most schools in the country (especially in Port Au Prince) did not open for the first 4 months of the 2019/2020 school year due to political unrest.  Because there was very little unrest in the Northwest, Beyond Relief did start school in September.  No one would have imagined that 2020 would bring another issue to add to the current problems.

In January 2020 classes were going as usual having just finished taking their semester exams.  In early March the first person infected with Covid 19 in Haiti was diagnosed as positive with the virus.  Haiti’s president immediately closed airports and borders and ordered all schools to shut down.  This time, for everyone’s safety, the school could not remain open. It is still not known if the school will be allowed at some point to reopen and finish the year. Mackel has plans to deal with reopening in the next couple of months or to remain closed until September.  Regardless, graduation will not be taking place in July.  Even though the staff is not working, the board made the decision to continue paying them even though classes have been cancelled. We don’t want to have the staff take another hit financially.  So please continue to give if you are able. If you can give any extra it will go to help the staff literally survive this time of crises.  Haiti is on the verge of famine and God has put this group of people into our lives. Please help us to help them and their families.

In this time when the U.S. is dealing with their own Covid issues, unemployment, and being confined to our homes, please remember that Haiti is going to suffer so much more. Below is a link to a news article that was published a couple of days ago in Haiti. It is in Creole so most of you won’t be able to read it, so I have included the English translation.

Thank you so much for all of your support!  God bless you and stay safe.

“Projected in October 2019, projections had established that from March 2020, nearly three million Haitians would find themselves in a situation of severe food insecurity, a step which precedes the situation of famine according to the classification used by the UN.” (Read more below) 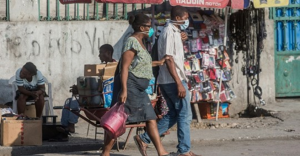 “The appearance of the coronavirus in Haiti panicked authorities and the humanitarian community, given the extreme weakness of the country’s health system, but the economic consequences of the pandemic could be more deadly for the poor majority of the population. With eight deaths listed in the last official report on Saturday, the Covid-19 epidemic is still in its infancy in Haiti, where confinement and social distancing constitute an unattainable luxury for many inhabitants living in the informal economy. To stem the spread of the virus, the government announced Saturday evening that the wearing of the mask would be compulsory in all public places from May 11, under penalty of legal sanction.

Dying of hunger today or of coronavirus tomorrow: on the heights of the capital Port-au-Prince, the merchants of the streets of Pétionville made their choice by demonstrating against the vain attempt of the town hall to limit their activity to three days per week.

Cereals constitute two thirds of the daily energy intake of the poorest Haitians. However, the price of rice more than doubled in certain provincial markets compared to 2019. The national food security coordination notes that this inflation has accelerated since March. This sharp rise in prices accompanying the coronavirus epidemic will only worsen the recession in the country, which began in the Fall.

“With the looming crisis, we expect a decline of almost 4% (of gross domestic product). This would mainly result from a near collapse of the agricultural sector, which would see its effective demand drop considerably,” said Prime Minister Joseph Jouthe at an annual summit on finance, organized only on the internet this year.

If the sector weighs only 21% in the GDP, agriculture concentrates half of the jobs of Haiti, recalled the economist Etzer Emile. Poor workers with very small farms, Haitian peasants today see their incomes melt in the middle of the lean season – between two harvests – aggravating their difficulties in preparing the next harvest, already threatened by drought in certain regions.

Long before the coronavirus pandemic came to cripple the global economy, the United Nations had already estimated that 40% of Haitians would need emergency humanitarian assistance this year.

The country’s plunge into extreme poverty has long been avoided by the essential financial support of its diaspora: the more than three billion dollars transferred annually by Haitians living abroad have so far constituted one third of the GDP. “Haitians depend on remittances for food, education and even a funeral,” said economist Kesner Pharel. Mainly based in the United States, the Haitian diaspora is now suffering the full force of massive unemployment in the world’s leading power.

The Haitian Ministry of Economy and Finance predicts that this financial aid will drop by almost a quarter in the coming months.

“We like to say that when the American economy suffers from the flu, Haiti suffers from pneumonia: the millions of jobs lost in the United States will cause worsening of extreme poverty, for sure”, worries Mr. Pharel