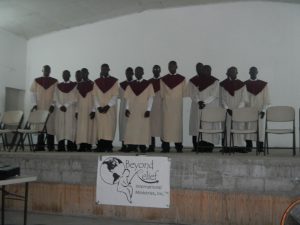 On August 11, 2013, Beyond Relief Trade School graduated 12 young men with graduation certificates in plumbing, electrical and art.  One

industrious young man, Accemat Wilbert, graduated with both plumbing and electrical certificates and was one of the school’s top students.  Many of these young men already have jobs in their new field of work.

John Barnes, director of House of Moses in nearby Port de Paix, gave an inspiring devotion.  The graduating class passed on the torch to the next class to encourage them to finish their work.  All graduates received a gift of tools in their chosen trade from Beyond Relief.

Congratulations to all the graduates!

The 2013-2014 school year started on October 7 with many new and exciting changes.  The school is now located in   a much larger building to accommodate all of the school’s growth.  The number of students has more than doubled since the school started in 2011.

Plumbing, electrical, art and English are still offered.  Two computer classes have been added with 15 students in each class.  When asked, new student Joseph Marckendy said about his English class “it was so amazing”.

A fundraising breakfast and silent auction will be held on November 9 from 9:00 a.m. to 10:30 a.m. at the Wingate by Wyndam in West Chester Ohio.  Reservations are required and are $10 per person which includes breakfast.  RSVP online at www.GoBeyondRelief.org/rsvp/ or send to Beyond Relief International Ministries 4893 Ezra Ct. Mason, OH 45040.  Seating is limited so make your reservations soon.

All donations are tax deductible and 100% of the profits go to fund the trade school.